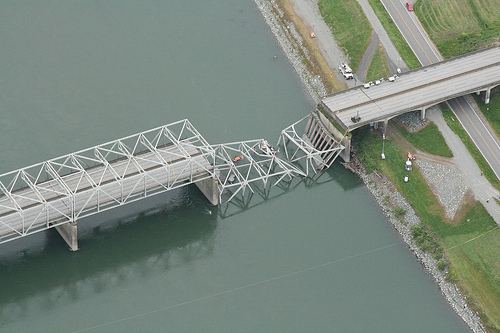 The Washington State Department of Transportation (“WSDOT”) recently awarded an emergency contract to clean up debris and repair the I-5 Skagit River Bridge.  The bridge trusses were struck by an oversized truck and a section of the bridge collapsed into the river on May 23, 2013, just one day before Memorial Day weekend.[i][ii]

On May 24, 2013, Governor Jay Inslee issued a proclamation that the estimated cost to repair the bridge is $15 million, and that emergency procurement procedures to hire a contractor were necessary to repair the bridge.[iii]  In emergencies such as this bridge collapse, RCW 47.28.170 allows WSDOT to obtain bids for the work without publishing a call for bids, and the secretary of transportation then awards the contract to the lowest responsible bidder.  In this case, WSDOT awarded the emergency contract to repair the bridge to Atkinson Construction Company (“Atkinson”), which is one of three WSDOT pre-approved emergency contractors.  Atkinson started work on the project by removing the vehicles and debris from the river.

The replacement bridge will eventually be constructed adjacent to the collapsed bridge.  It is unclear if the Governor’s $15 million estimate included the cost to construct the new bridge, and it is also unclear whether the contract for the new bridge will be issued under the emergency procurement methods or under standard procurement methods.  It will be interesting to see how long the temporary bridge actually takes to complete, especially with the Governor’s challenge to install a working temporary bridge by the middle of June.  In the meantime, traffic has been detoured through the towns of Burlington and Mount Vernon.