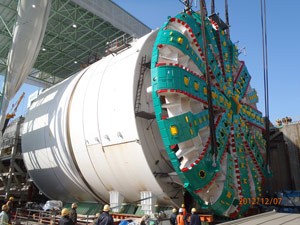 Seattle Tunnel Partners (“STP”) has a contract with the Washington State Department of Transportation (“WSDOT”) to dig a two-mile long tunnel (using the world’s largest diameter tunneling machine) to replace the SR 99 viaduct.  STP is a joint venture of Dragados USA, Inc.[i], based in New York, NY, and Tutor Perini Corporation, based in Sylmar, CA.

Since early December, tunneling has been halted.  Initial reports suggested that a 119 foot long, 8 inch diameter, steel well casing was the mystery object stopping the tunnel boring machine (“Big Bertha”) from her quest to drill a four lane tunnel beneath Seattle.  WSDOT installed the pipe in 2002 to measure groundwater levels and was mentioned in reference material provided to bidders.[ii]  STP had assumed that the pipe had been removed until it got stuck in Bertha’s cutting teeth halting progress.

Now reports suggest that a hard object (described as either concrete or rock) became stuck in Big Bertha.  STP crews are continuing to conduct hyperbaric probes, which have revealed a 3-foot-wide object, along with plastic and metal piping, lodged inside the machine’s spokes.

As to what caused Bertha to stop in her tracks, no one really knows, “none of these things in and of themselves is enough to slow the machine down” said Laura Newborn, a spokeswoman for the WSDOT.[iii] As of this writing, Bertha has traveled 1,900 of the 9,270 feet required to complete the project.

The shutdown has likely drastically affected STP’s cost.  The City of Seattle and WSDOT have already indicated that their taxpayers should not be charged for the cost overruns related to work delays.  Adding to STP’s woes, WSDOT has recently indicated that STP is in breach of its contract for having created hardships for Disadvantaged Business Enterprises (i.e. minority and women owned businesses) trying to get work on the $3.1 billion tunnel project.

STP’s predicament is not unprecedented.  Just last December, King County scored a $155.8 million victory against the tunneling contractor, VPFK, at the Brightwater project.  Brightwater Case.  VPFK was a joint venture composed of Vinci Construction Grands Project and Parson RCI/Frontier Kemper.  It sought compensation for differing site conditions after its tunnel boring machine got stuck.  There, the issue involved whether or not the obstruction qualified as a differing site condition.  After hiring another contractor to finish the tunnel, the County commenced an action against VPFK and obtained a $129 million verdict on December 21, 2012, just before the holidays last year.

Comment:   The issues presented in the STP case will be closely followed by these bloggers.  We will keep our readers informed of the developments as they unfold.  We can expect that there will be some sort of dispute process arising out of the major delay.  Exacerbating the economic pressure on WSDOT, the 520 project is running over budget due to its design issues and the City of Seattle’s seawall project ($31 million cost overrun to date) has grown from the $300 million project to $331 million project.

[i] Dragados USA, Inc. is a wholly-owned subsidiary of Dragados, S.A., which is the construction division of ACS Group of Spain, one of the job biggest international construction companies in the world.

PrevPreviousA Tale of Two Teaming Agreements: One Enforceable, the Other Not
NextCan a Contractor be Forced to Pay Twice for a Subcontractor's Employee Benefits?Next
Scroll to Top