Filing Of Lien-Release Bond Does Not Preclude Priority Dispute 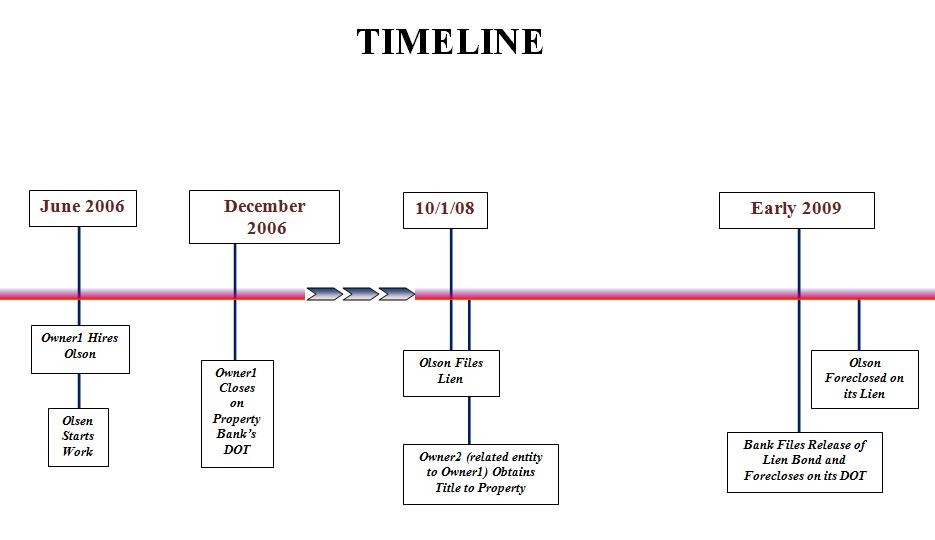 In December 2006, over six months after Owner1 hired Olson, Owner1 closed on the Property (Owner1 became “owner” of the Property).  The sale was financed by a bank (“Bank”), and Bank was granted a deed of trust secured by the Property.

Over 2 years later, on October 1, 2008, Olson, who had been doing engineering on the project since June 2006, filed a lien against the Property as a whole-not against the individual 11 parcels.  That same month, Owner2, an entity related to Owner1, acquired title to the Property, and Owner1 (the builder and developer) and its principals declared bankruptcy.

As a result of the bankruptcy, the Bank foreclosed on its deed of trust and filed a release-of-lien bond pursuant to RCW 60.04.161. Thereafter, the engineering firm (Olson) filed an action to foreclose its lien claim.

The engineering firm sought: (1) a money judgment for amounts due and owing from Owner1 and Owner2; (2) a decree enjoining the Bank from selling the Property at the trustee sale; (3) an order establishing the engineering firm as having priority over the deed of trust; and (4) an order barring the Bank from asserting any right or interest in the Property.  In Washington, a lien claimant’s lien priority date relates back to the first day work is performed on the project. In this instance, because Olson performed work on the project in June 2006, before the Bank’s deed of trust attached to the project in December 2006, the court awarded the engineering firm a judgment of $107,446 against the Bank. The case, however, was appealed.

On appeal the issues were:

Ultimately siding with the Bank, the court held that the plain meaning of the release-of-lien bond statute (RCW 60.04.161), when viewed in the context of the entirety of the lien statutes and the statutory scheme as a whole, permits parties to dispute lien priority after the filing of a release-of-lien bond.

The Appellate Court also overruled the trial court’s opinion that the engineer’s lien, as a matter of law, had priority over the Bank’s deed of trust because at the time the engineer (Olson) commenced its professional services, Owner1 (the entity directing the work) did not own the Property.  A lien right is only created when the work is performed “at the instance of the owner.”  RCW 60.04.021.  Hence, there was an issue of fact precluding summary judgment that the engineer’s lien was “created” before the Bank’s deed of trust attached to the Property.

Similar to the argument above, but attacking the lien itself, the Bank also argued that Olson’s construction claim was improper as a whole because the work on which Olson predicated its lien was not “furnished at the instance of the owner” of the Property or an agent of the owner, as required by Washington’s lien statute (RCW 60.04.021). Olson took the position that it provided services at the request of Owner1, who eventually became the owner of the Property.  The Court of Appeals held that Owner1 was not an “owner” of the properties until after June 1, 2006, after the Bank recorded its deed of trust and therefore, Olson did not work at the “instance of the owner” until after Owner1 acquired the Property on June 1, 2006.  Thus, Olson’s lien was invalid.

Finally, the Bank argued that Olson’s single lien, though Olson did work on multiple properties, did not accurately reflect Olson’s multiple and divisible contracts to do work separately on each of the subdivisions (there were 4 subdivisions). Olson’s position was that its work benefited the entire Property and that the intention of Olson and Owner1 was to create a single contract rather than multiple divisible contracts. The Appellate Court held that Olson’s “blanket lien” was appropriate, and despite the fact that the professional services invoices showed that Olson worked and billed separately for multiple properties, its work benefited the entire Property and was indivisible.

PrevPreviousWho Benefits From The Fiscal Cliff Deal
NextImplied Duty to Ensure a Safe Workplace – Who Owes the Duty?Next
Scroll to Top