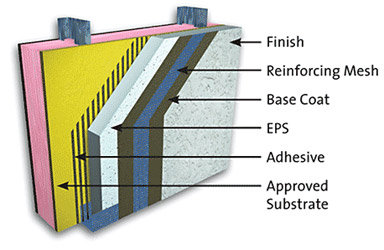 Exterior Insulation Finish Systems, commonly known as EIFS or synthetic stucco, are multi-layered exterior wall systems used on both commercial buildings and residential homes. These systems, as illustrated below, are usually comprised of five layers: (1) an exterior finish; (2) a reinforcing mesh to protect the system; (3) an insulator (i.e. Expanded polystyrene (EPS) foam); (4) an adhesive substance binding the insulator to the building; and, (5) a substrate to which the insulator is attached.

When EIFS was introduced nearly 30 years ago, commercial and residential property owners and developers were attracted to the stucco-like appearance that allows broad design and color flexibility at low costs.  The benefits of low maintenance and durability and increased energy efficiency also added to its initial popularity.  However, problems began to arise overtime where the systems were not installed, caulked, or sealed properly.  Rainwater, wind-driven rain, or moisture was commonly penetrating poor quality window and door openings.  This causes water to be trapped behind the EIFS exterior.  The waterproof design of EIFS that was supposed to keep water out actually prevented water from leaving the system.  With nowhere to go, the water begins soaking into wall studs and plywood sheathing, which in most cases lead to rot.

Insurers issuing general liability policies to construction contractors caught on to the rot problem quickly and began drafting exclusions in their policies.  Exclusions for construction defect claims involving EIFS are now common and vary in breadth from excluding coverage for any work performed on EIFS to any property damage arising out of or caused by EIFS.  Naturally, this caused many contractors to stop installing EIFS or parts that interfaced with the system.

A recent decision by the U.S. District Court of Washington (at Seattle) should give further pause to those contractors that do any work on any exterior component, fixture, or feature of a structure where EIFS is used on any part of the building or home.  In First Mercury Insurance Company v. Miller Roofing Enterprises,[i] a roofing contractor installed a roof in 1998 on a building with a home decorating showroom.  In 2006, the roofing contractor returned twice to perform repairs pursuant to two oral agreements.  Despite the repairs, the roof leaked after heavy rain and snow storms in 2007.  The owner sued the roofing contractor for breach of the two oral contracts.  The insurer initially defended the roofer against the owner’s lawsuit under a reservation of rights.  Concurrently, the insurer filed a declaratory judgment action in federal court for a declaration of no coverage and filed for an immediate summary judgment based on the insurance policy’s EIFS exclusion.  The insurance policy at issue contained the following EIFS exclusion:

This insurance does not apply to … “property damage” included in the “products-completed operations hazard” and arising out of “your work” described as … [a]ny work or operation with respect to any exterior component, fixture or feature of any structure if any “exterior insulation and finish system” is used on any part of that structure.

The U.S. District Court of Washington granted summary judgment and held that the exclusion barred coverage.  The roofer first argued that the EIFS exclusion does not apply because the leak was the result of “defective workmanship to the roof itself,” and the roofer “did not install the EIFS on the building, nor did it undertake to make any repairs to the EIFS itself.”  The Court held this was “irrelevant” because “[t]he exclusion applies not only to property damage arising from EIFS-related work by the insured; it applies to property damage arising from ‘any‘ work by the insured on an exterior component, fixture, or feature of a structure, as long as ‘exterior insulation and finish systems’ is used on any part of that structure.”  The roofer argued second that EIFS was employed only on the exterior walls of the structure and not where the roofers performed repairs.  The Court held this was also irrelevant because “[t]he exclusion applies if ‘any‘ exterior insulation and finish system is used on any part of th[e] structure.”

Essentially, the Court agreed with the insurer’s reading of the exclusion: this exclusion “mean[s] that [the insurer] could escape any liability from any negligent act performed [by any contractor that works on any exterior component, fixture, or feature] on the building because [EIFS] was placed over the exterior walls.”  As a result of the judgment, the roofer faces paying for all the cost of its defense against the underlying lawsuit moving forward and any damages awarded to the owner out of its own pocket.

Comment: We advise those contractors working on any exterior component, fixture, or feature of a building or residence that uses or will use any EIFS to review your insurance policy for any EIFS exclusions similar to the one above.  An endorsement to your policy or a separate policy may need to be procured to cover your work.