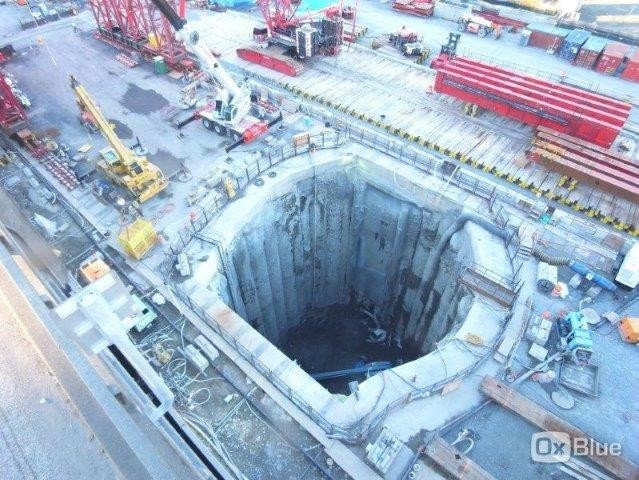 Since December 2013, the tunnel boring machine (“TBM”) known as “Bertha,” built by Hitachi Zosen Corp. in Osaka, Japan, has been stuck under Seattle’s waterfront about 1,000 feet from where it began.[i]  We have previously updated our readers on Bertha’s progress with posts, including, STP’s Plan to Fix Bertha, Bertha and Brenda, and Big Bertha Stuck.  As background, Bertha is the TBM digging the $2 billion tunnel designed to replace the aging Alaskan Way Viaduct that was damaged in the 2001 Nisqually earthquake.

The latest projections are that Bertha will resume digging at the end of April 2015.  Seattle Tunnel Partners (“STP”), the general contractor for the tunnel project, is digging a concrete-piling-lined pit in front of the stuck TBM.  Under the current plan, Bertha will then tunnel her way through the pilings into the pit, giving STP access to Bertha’s cutter head.  If things go as planned, the cutter head will be removed and repaired.

Bertha is the world’s largest TBM at 57.5 feet in diameter, which means that the planned repair is no simple task.  Since the TBM is stuck underground, STP does not know the extent of the damage.  The excavation of the rescue pit (shown in the photo below) has been challenging. The shaft is presently about 90 feet deep, which is approximately three-quarters complete (the shaft will eventually be 125 feet deep).

Excavation on the shaft recently re-started on December 16, 2014, after a week long delay caused by ground settlement in the area.  Washington State Department of Transportation (“WSDOT”) officials determined that the ground has now stopped settling.  WSDOT is investigating whether the de-watering operations for the rescue pit were a factor in the settlement.  Crews doing building surveys since December 2013 have determined some “cosmetic damage” in a handful of buildings, but, according to WSDOT, no structural damage.  WSDOT Deputy Administrator of the Alaskan Way Viaduct Replacement Program, Matt Preedy, indicated that the settlement is likely to be less than the 1.4 inches originally thought to have occurred.  The surveyors found some of the survey-controlled points reading were not accurate and needed to be corrected.  Apparently, the survey benchmarks had moved, which is not uncommon.

Original projections by STP, when the project started, called for the tunnel to open to traffic in December 2015.  However, those schedules were made long before Bertha stopped tunneling in December 2013.  According to STP’s Project Manager, Chris Dickson, Bertha is now scheduled to resume her tunneling by late April 2015.  Even if the tunneling resumes in late April 2015, however, don’t expect the tunnel to open to traffic until August 2017 under best case scenario.

The excavation of the 125-foot shaft is itself a challenging construction project.  Adding further variables to the anticipated project completion date, there is no certainty how damaged the TBM is or how long the repair is going to take.  The date the tunnel will actually be completed or if it will be completed at all can only be determined after the access pit is complete, the TBM is rescued, and Bertha has demonstrated that she can successfully operate.  Nevertheless, STP remains confident that it can make up for the lost time once Bertha gets started again.