Gov. Inslee Flashes his Cards as to Defenses Against Tunnel Contractor 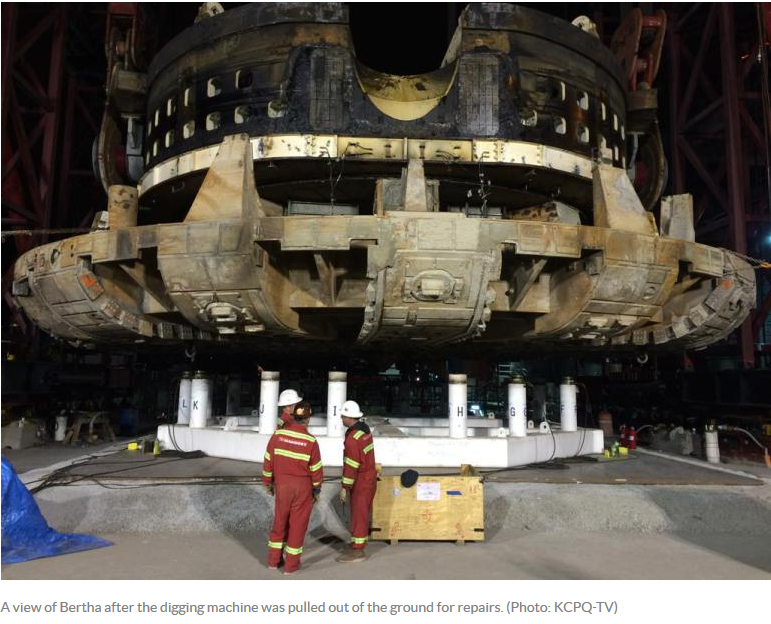 The Alaskan Way Tunnel Project remains front and center in the news.  Hardly a day goes by when we are not bombarded with an article about the status of the tunnel project.  As it sits now, tunneling is to resume in November of 2015, pushing the completion of the project back until March of 2018.  In May, the contractor, Seattle Tunnel Partners (STP), received a favorable recommendation from the Dispute Review Board (DRB) that the eight-inch steel well casing, which STP claimed shut down the Tunnel Boring Machine (TBM), was a differing site condition.  Recently KCPQ-TV’s Brandi Kruse interviewed Gov. Inslee concerning the tunnel to replace Seattle’s aging Alaskan Way Viaduct.  The interview was interesting because it provided a subtle preview as to Washington State’s stance as to its defenses against the tunnel contractor’s potential differing site conditions claim.

As Ms. Kruse was walking into the Governor’s office, she ran into Secretary of Transportation, Lynn Peterson, in the Governor’s lobby.  Apparently the Governor had just been briefed by Ms. Peterson.  The entire interview is available online. [i]  Gov. Inslee, when asked how confident he was that the November 2015 schedule start date and March 2018 completion date could in fact be met, was noncommittal and could not be tied down.  The Governor did spend a lot of time discussing that the TBM is undergoing substantial alterations and “a very significant redesign and repair,” “essentially remodeling from the machine.”  Gov. Inslee believes that the machine is going to be “substantially different than the one [STP] started with, because frankly the one they started with didn’t work, didn’t cut the mustard, and didn’t dig the dirt.  So they have gone to the drawing board.  They have redesigned it, have reconfigured it, they have remodeled it, and they are in the process of getting the job done.”  We can read between the lines that Ms. Peterson likely planted these ideas in Gov. Inslee’s head in the pre-interview meeting.  It looks like the State’s defense to the differing site conditions findings by the DRB will be that the TBM was improperly designed to begin with, and that the shutdown of the TBM had nothing to do with the eight-inch pipe, and instead was due to the TBM’s inadequate design to begin with.

The interview went on, and the Governor was vehement about assessing the liquidated damages against STP.  “We are the customer and if [STP] is late, which pretty obviously they’re going to be, they actually will owe us up to $100,000 a day under our contract for their late performance.”  It appears that the WSDOT is going to take a very vehement stand against any claim brought by STP and instead go on the offense charging the contractor with liquidated damages.  The Governor went on to emphasize that the contractor is putting in over 100 tons of new steel in the TBM and that they are reconfiguring the electronics of the machine.  The Governor is bolstering the State’s position that the TBM was inadequately designed to begin with and that the eight-inch steel pipe (which the DRB found was a differing site condition) was not the cause of the TBM breakdown.

When the interviewer expressed some concern over the safety of her tax money, the Governor responded, “I’m the No. 1 frustrated person in the state of Washington about this.”  He admitted that the State has no alternative plan (Plan B) and that the only option at this point to reduce the danger posed by the crumbling Alaskan Way Viaduct is the tunnel.  So as far as Gov. Inslee is concerned, despite the fact that the project is over two years behind schedule, “they owe us a tunnel.  We are going to insist that they get that job done.”

Comment:  No one really knows whether Bertha will successfully dig the tunnel or not.  The contractor will get the TBM going again, likely in November of this year, and test the machine’s capabilities before diving underground where, if the TBM breaks down, a rescue would be very difficult and cost a significant amount of money.  Only after the TBM has been tested will the contractor be able to predict to some degree of certainty when the tunnel project will be completed.  What is certain, however, is the State of Washington, the tunneling contractor, and the manufacturer of the TBM will be locked in a legal battle as to who should pay for the significant delay and disruption damages that have occurred since the TBM first broke down in December 2013.