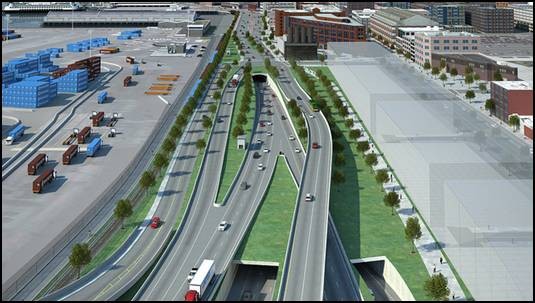 While the recession has definitely made its (hefty) mark on the Northwest’s construction industry and the economy, A+C recognizes some of the larger infrastructure construction projects in Washington, Oregon, and Alaska from 2011. We wish all of our readers a prosperous and healthy 2012!

The landscape and views at the stadiums and King Street are radically different.

Kyle Stewart, an ironworker with Rebar International and a journeyman member of Local 29, attaches crosshole sonic logging tubes to a rebar cage. (Photo by Sam Tenney/DJC)

A new overpass was built and opened to traffic in Nov. 2011 as part of the I-5 Grand Mound to Maytown Stage 2 that improves the I-5/US 12 interchange.

Looking toward eastbound traffic at the top of the new SR 522 flyover ramp.

Crews set vertical piers into the ground on either side of the existing culvert over Burnt Bridge Creek.

Crews constructed the Gold Creek Bridges in the summer of 2011. Crews opened the eastbound lanes, and will open the westbound lanes 2012.