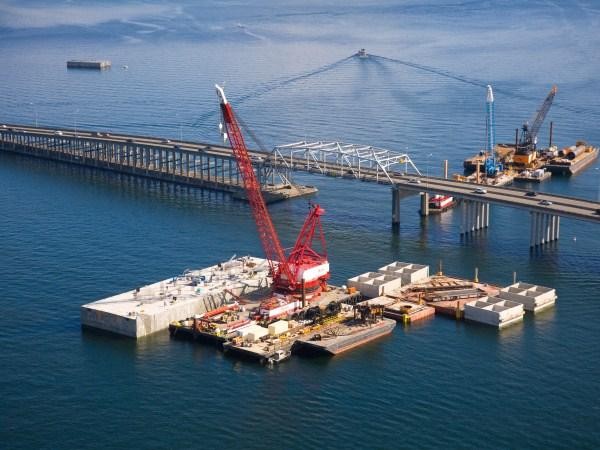 Readers of this blog are aware that we have been tracking and ranting about the poor condition of our national infrastructure since the blog’s inception.  In May 2013, a truck carrying an oversize load collided with the “fracture/critical” I-5 bridge over the Skagit River near Mount Vernon and brought home to everyone the dismal condition of bridges, highways, power, water, and sewer infrastructure.

In recent years, the North Dakota shale oil exploration has driven down gasoline prices.  The Washington Legislature has taken advantage of this “dividend” by taxing its citizens with a much-needed gasoline tax to bolster up the crumbling state transportation infrastructure.  It is past time for this state to start fixing roads, bridges, and building an investment in long-term transportation needs.

In mid-July 2015, the Washington Legislature passed and the governor signed a package of transportation bills that include an 11.9 cent gasoline tax increase and some $16 billion worth of projects around the state.  The first 7 cents per gallon of the new gasoline tax started August 1, 2015, and the transportation improvement plans stretch into 2031.  The projects will create 100,000 family-wage jobs over the next 16 years, and will increase the efficiency of transporting goods and services.  Long commute times mean that Washington citizens are missing valuable time with their families, and businesses’ efficiencies suffer.  As the state’s population continues to grow, investing in public transportation and pedestrian safety is essential.

The package took nearly three years of negotiations, compromises, false starts, and debates in the Legislature.  In signing the bill on the University of Washington campus, Gov. Inslee called it a “monument to the optimism” of the state. “Big things do take time,” said Inslee, who had called for a major transportation package in his inaugural address in 2013.  To seal the deal this year, Inslee had to give up his push for a carbon-reduction tax to get the wide-ranging transportation package that he categorized as “for the greater good of our state.”

Here are some of the significant investments of this package:

A major concern for the Legislature was how to reduce pedestrian fatalities.  Last year about 70 pedestrians were killed, and about 300 people were seriously injured on Washington roads.  That number prompted the Legislature to create the Pedestrian Safety Advisory Council to serve as a central, expert body dedicated to making communities safer for all users of transportation.  The Legislature also created a new Electric Vehicle infrastructure bank, which will help develop a more extensive network of charging stations to make travel by electric vehicle simpler and more practical.  Finally, in an effort to reduce the cost of bureaucracy, the Legislature streamlined the permitting process for transportation projects to be built more quickly and efficiently without sacrificing its “commitment to protecting our environment or our green spaces.”