Homeowners Kidnap Contractor "To Finally Get Some Work Done" 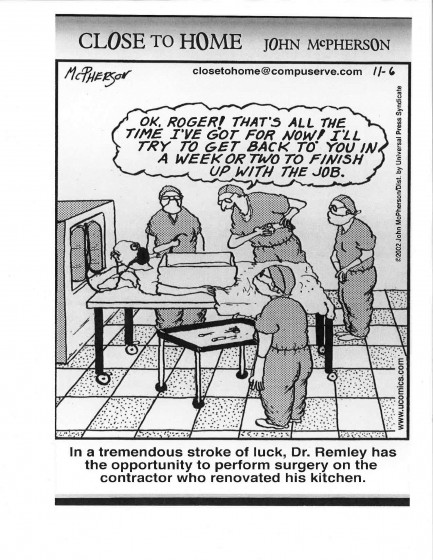 Here’s a story from Northern California which demonstrates the frustrations homeowners sometimes have with their contractors.  Much of the consumer friendly legislation in state lien laws stem from disgruntled homeowners.  Homeowners, who claim to have been taken advantage of by unscrupulous home-remodeling contractors, complain to their legislators, and in turn, the legislators’ cure is to pass more protective laws for consumers.  What follows is an extreme example of “Remodeling Rage,” and, when we read about this contractor kidnapping, it both captured our attention and imagination.

A Santa Clara couple, who reportedly lived in a “sprawling” five-bedroom home that included a pool, tennis courts, and a beach volleyball court, hired a San Jose handyman to repair a water heater. The homeowners did not pay the contractor for the work which led to a back-and-forth exchange regarding the bill.  The homeowners then coaxed the handyman back to their residence with the promise of payment and additional work (the promise of money and additional work appears to have had a narcotic effect on a contractor’s brain).

When the contractor showed up, however, he did not receive the payment he expected.  Instead he was punched in the face, and the couple threatened to kill him unless he complied with their repair demands.  It appears the couple was trying to get their monies worth out of this contractor. They forced the man to repair their dishwasher, fix a broken door, and do other household work during a seven hour ordeal.  That free work was apparently not enough for the couple.  They ordered him into their van and set off to a relative’s house, where they expected him to do even more work.

In a move reserved for America’s dumbest criminals, on the way to the relative’s house, the couple stopped for gas and snacks at a nearby Chevron station. They left the handyman in the van.  At this point, apparently the narcotic effect of the promise of money and extra work had worn off.   The contractor chose to disobey the instructions and ran to a nearby house where he called the police. The law enforcement officials arrived fairly quickly because they found the couple “still in the snack aisle” of the Chevron station.

The homeowners were charged with kidnapping, false imprisonment, carjacking, criminal threats, conspiracy, and assault with a deadly weapon.

Comment:  Illustrative of homeowners’ frustrations with their contractors is the cartoon set forth below.  It seems that doctors have also had some choice experiences with home remodel contractors as well.