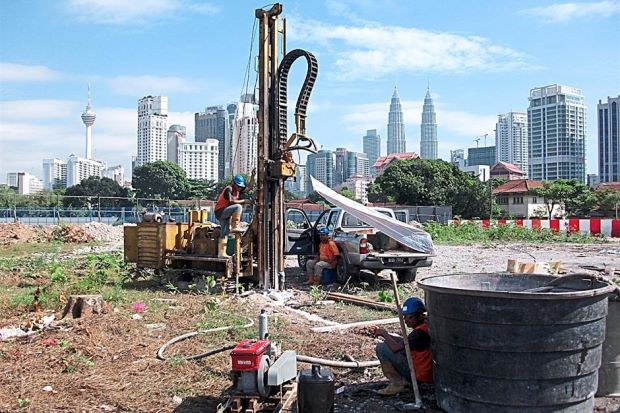 At times, both public and private owners succumb to the temptation of taking back what was given to a contractor through a differing site conditions clause by including disclaimers in their contracts as to the reliability of site condition information supplied in the bidding documents.  The disclaimers may be specific statements, such as “no claims for differing site conditions will be recognized regarding the absence or presence of subsurface rock or unstable rock conditions,” or general statements, such as “the contractors shall not rely upon any contract indications or owner furnished information, but should make their own soils analysis.”  The effectiveness of these disclaimers depends upon the specific language used.  The more general the language, the more likely the disclaimer will be rejected.  The outcome also depends on the jurisdiction in which a party attempts to enforcement of the disclaimer.

Recently, we came across the following definition of “differing site conditions” (“DSC”):

Differing Site Condition shall mean: (a) subsurface or latent conditions encountered at the actual boring holes identified…which differ materially from those conditions indicated in the geotechnical reports for such boring holes; or (b) subsurface or surface physical conditions of an unusual nature differing material from those ordinarily encountered in the area and generally recognized as inherent in the type of work provided for in the agreement.[1]

An owner may take the position that clause (a) requires that the contractor show that the material at the boring hole itself is different from the material that is reported in the geotechnical report for that hole.  Under this interpretation, a contractor cannot recover under clause (a) unless the differing site condition is literally right at the boring hole, which is not very likely.  On large construction projects, borings can be widely spaced and there can be significant variance in conditions that are missed.

This interpretation upends the typical way in which a geotechnical report interact with differing site conditions clause and how contractors generally bid projects.  Contractors commonly interpolate conditions between boring samples – i.e. they make reasonable assumptions as to how the conditions between the boring holes change from one hole to the next.  To visualize this, think of a graph that a contractor makes when bidding a job, drawing straight lines between borings to show how conditions gradually change from one boring hole to the next.  There are no assurances that the conditions change according to a straight line, but it may be reasonable to assume that they do.

Under the owner’s interpretation of the definition of DSC above, it would also be extremely difficult to identify the exact location of a boring hole once construction starts and almost impossible to isolate what is found during excavation at that exact location.  The contractor would almost never meet the threshold for recovery.  In addition, even if the contractor were lucky enough to prove that conditions are materially different at the boring hole itself, the contractor will presumably only get paid for the few cubic yards of differing material at that location, since the boring hole has a small diameter.

A contractor may take the position that the use of the term “indicated” in clause (a) refers both to conditions that are expressly stated in the geotechnical report and to conditions that may be reasonably inferred from the report.  The term “indicated” could suggests that a contractor may make reasonable inferences as to what occurs between boring holes. However, what the above definition of DSC gives with one hand, it takes away with the other.  Clause (b) removes all opportunity for the contractor to either infer conditions that are not expressly provided for in the geotechnical report or to interpolate conditions between boring holes.  For this reason, a contractor may argue that the definition of DSC is internally inconsistent.

If an owner cannot stand behind the reasonable inference of its geotechnical report, it should bid the job as “unclassified” and suffer the consequences of high bids.  Clearly, owners that employ these types of clauses would like bidders to rely on the boring report so that bidders do not add a contingency to their bids for the risk of an unknown underground condition.  However, it would be more intellectually honest for an owner to simply disclaim all liability for subsurface conditions and not provide the geotechnical report to bidders.  If the owner desires to shift the risk of differing site conditions, it should assume some of the cost.

In federally-funded construction contracting, there is a strong policy in favor of using differing site conditions clauses.  For example, in federal government highway transportation contracts (state contracts funded by the U.S. Department of Transportation), the federal government mandates the use of differing site conditions provisions that recognize the standard Type I and Type II differing site conditions.[2]  In addition, 23 CFR 635.109 contains requirements and procedures for following the DSC clause, which must generally be included in all federal-aid highway projects, as mandated in the 1987 Surface Transportation and Uniform Relocation Assistance Act.  Returning to the definition of DSC above, if a project is a federally-funded project, there is a question as to whether the carefully-tailored disclaimer is enforceable despite the precedent that the federal government exerts over states.

The federal DSC clause contained in Federal Acquisition Regulation (“FAR”) 52.236-2 has also been the model for dealing with the risk of differing site conditions in other standard-form contracts, including those used by the American Institute of Architects and the Engineers Joint Contract Documents Committee.  Although FAR 52.236-2 may differ slightly from that used in other contracts, the differences are relatively minor and do not substantively affect the contractor’s ability to recover for additional costs and time caused by differing site conditions.

Comment:  There are reports that when confronted with this type of conflicting geotechnical information and disclaimer clauses that have the effect of annulling any meaningful information in the geotechnical reports, contractors have requested to do their own geotechnical report.  This request is generally met with a resounding denial by public works owners concerned about the legal liability were a horde of builders descend on their site to start digging it up.  As a result, if the contractor asks to perform its own geotechnical report due to the conflicting information contained in the bid documents and the owner denies that request, it will be awfully difficult for the owner to later reject a claim based on a differing site condition encountered.

[1] Thank you to Jeff Ford, with Ford Nassen & Baldwin PC, Joe Kovars, with Ober Kaler, Richard H. Lowe, with Duane Morris LLP, and Robert J. Smith, with Akerman, LLP.  This blog drawn from their comments from a recent exchange on the American College of Construction Lawyers list serve.

PrevPreviousIs a Contractor’s Obligation to Continue Performance Absolute When Confronted with an Unresolved Dispute?
NextAhlers & Cressman Wins Client Choice Award for 2016Next
Scroll to Top