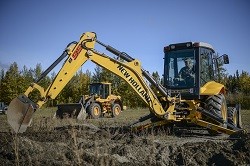 Before putting the project out to bid, the City had its design team identify potential utility conflicts at the proposed location for the new traffic signal. The City identified the PSE lines and contacted it to consider moving its power lines. There were two groups of lines that were identified in the excavation area by PSE. The northern group was 5 to 6 feet below grade, but the southern group was only 4 to 4 ½ feet below grade. PSE’s contractor told the City that it could accommodate the design plans by moving the lines in the southern group only. In April of 2013, PSE’s contractor moved the power line in the southern group only.

Also in April 2013, the City put the project out to bid. Titan was the low bidder and it entered into a contract with the City to perform the work. The contract specified Titan was responsible for locating underground utilities in compliance with the one call locator requirements. Notably, the City’s plans showed the location of both the southern and northern grouping of powerline conduits despite the fact the southern grouping had been relocated. Titan and the City, along with Titan’s subcontractor, had a preconstruction meeting in May of 2013. At this meeting, the City represented to Titan that “[PSE] has relocated [its] below ground utilities for this project prior to beginning the work.” This statement was incorrect because the northern lines had not been relocated by PSE.

At that time, the PSE trench was open, but the deeper northern group of lines was still covered. Titan and its subcontractor (TSI) did not and could not see the northern lines. In July 2013, Titan and TSI requested an underground utility locate, which located the northern and southern lines. Titan’s subcontractor initially used a vactor (vacuum) to excavate the signal pole base. However, once they reached the shallower depth of the southern conduit, they switched to a three-foot wide auger. The three-foot wide auger then struck the northern group of utility lines.

The Court of Appeals first held that the northern and southern group of lines were properly marked. There is some dispute whether that was the case because the southern group was marked on the steel plates which were then moved. However, the lines were re-marked before the excavation occurred. As to whether the City was nonetheless still liable, the court first noted that the UUDPA required the City to “indicate in the bid or contract documents the existence of underground facilities known by the project owner to be located within the proposed excavation area.” The Court held that the City complied with that requirement. The Court held that the duties of Titan were to determine the location of the underground facilities that had been marked and to plan the excavation to avoid damage or minimizing interference with the underground utilities. The statute assigns liability to any party who fails to comply with its responsibilities under the UUDPA. As a result, the Court held that Titan was responsible for the PSE damages and the City was not liable.

Comment: The interesting part about this case is the timing of when everything occurred, which caused the apparent confusion to Titan. It is correct that the City’s plans show the location of both the southern and northern grouping of powerline conduits, but those plans appear to be inconsistent with what the City had represented to Titan during the preconstruction meeting in May of 2013. Titan may have believed that the representations of the City representatives during this meeting, which occurred after the PSE lines were relocated, was better information than the plans that were issued by the City prior to the PSE relocate. The takeaway from all of this for utility contractors is that you should not rely upon the oral statements of Owner representatives that conflict with either the plans issued by the Owner or the markings that are done by the utility locate services.

PrevPreviousBertha – The Tunnel is Finished, but Her Legacy Continues
NextChanges to Family and Medical Leave in WashingtonNext
Scroll to Top