Who is Covered by the Miller Act on Federal Public Works Projects? 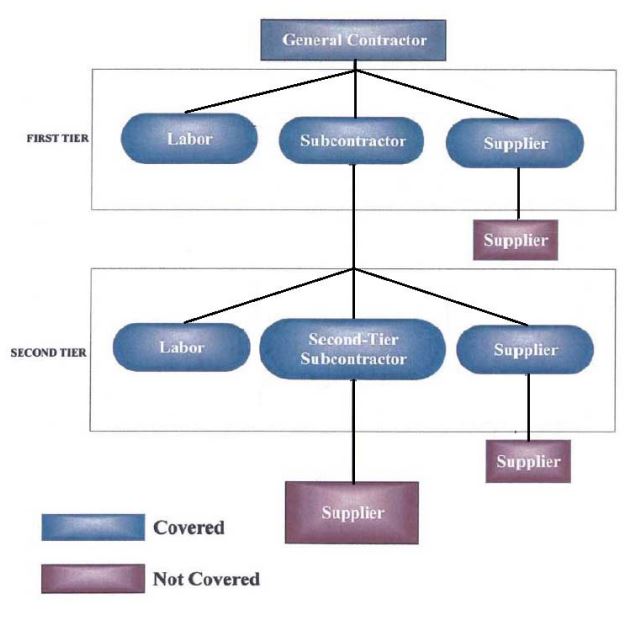 Historically, the common law doctrine of sovereign immunity prevented liens against public property, and federal statutes allowed only those in privity of contract with the federal government to sue to enforce contractual rights.  To address this concern, Congress enacted the Heard Act in 1894.  In 1935, Congress repealed the Heard Act and enacted the Miller Act in its place.  The Miller Act requires that all general contractors post payment bonds on contracts in excess of $25,000.00.  If the contracting officer determines that a payment bond in the full amount of the contract is impractical, he or she may set a different amount for the payment bond.  Bonds of half the contract amount are common on federal jobs.

The Miller Act makes no attempt to define the word “subcontractor.”  The statute is highly remedial in nature, and is liberally construed and applied by the courts to protect those whose labor and materials go into federal public projects.  To determine whether a first-tier material supplier was in fact a “subcontractor” to the prime contractor for purposes of the Miller Act, courts will focus on the contractual and commercial relationship between the first-tier material supplier and the prime contractor.

Distinction Between Subcontractor and Supplier:

Exclusion of Lower-Tier Subcontractors and Suppliers:

Comment:  While, at first glance, it may seem fairly simple to sort out who is and who is not covered by the Miller Act payment bond, the analysis can at times be factually and legally complex.  This is an area that, if faced, the contractor should seek legal advice of an experienced construction lawyer before jumping to conclusions. Just because a supplier signed a “subcontract” form with the general contractor, the courts may not elevate the form (i.e. the written subcontract) over the substance (i.e. mere supplying materials).