Bertha is Stuck and She Remains Mired in Controversy 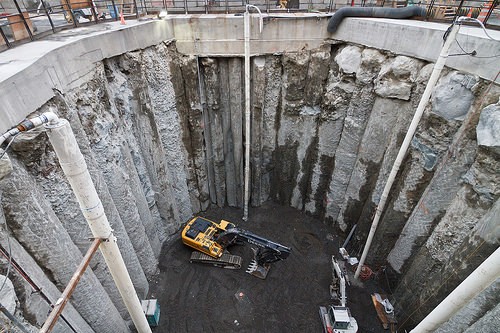 Barely a day goes by without Seattle media attention focus on the Seattle Tunnel Project.  Bertha, the tunnel boring machine (“TBM”), has been stuck (since last year) under Seattle’s waterfront approximately 1,000 feet from where the tunneling began.  The tunnel is designed to replace the aging Alaskan Way Viaduct that was damaged in the 2001 Nisqually Earthquake.  Read more here: Bertha Is Stuck and Challenges Persist:  Latest Projected Opening is August 2017.

On January 23, 2015, the Daily Journal of Commerce reported that the Project’s Dispute Review Board (“DRB”) sided with Seattle Tunnel Partners (“STP”) on a $20 million Change Order that the contractor filed in late 2012.[i]  That Change Order did not relate to the stoppage of the tunnel machine or any of the recent settlement (which turned out to be a shifted benchmark) near the rescue pit (that is being dug in front of the stalled TBM).  The Washington State Department of Transportation (“WSDOT”) indicated that the DRB’s decision had to do with a “differing site condition [that] was encountered in the glacial soils and [determined] that STP is entitled to relief.”[ii]  As is common with DRB decisions, the Board did not determine the extent of the cost of the delays, but instead issued a recommendation on entitlement.  It is now up to WSDOT to review that recommendation, and whether it agrees with the Board’s recommendation to settle on a price with the contractor.  In a previous proceeding before the DRB for a $5.5 million Change Order request by STP to strengthen the Viaduct in advance of the tunneling under it, the Board sided with WSDOT.

No conclusions can be drawn from two DRB decisions (one in favor of STP, the other against STP) as to what the DRB may do when it is confronted with the pending STP Change Order request, rumored to reach $210 million, that includes an estimated $125 nukkuib for Bertha delays and repairs.  We do know that the State has a contingency budget of $144 million and that the WSDOT administrator for the Project has told the Transportation Committee that the Project “can be paid for without what is considered a cost over and under the budget.”[iii]  Apparently, that assurance was not good enough for Washington State legislators who recently proposed a bill that would scrap the Seattle Tunnel Project, saying the State needs to “stop throwing money at a hole in the ground.”[iv]

On January 28, 2015, two Republican Senators introduced a bill contending that the Alaskan Way Viaduct Replacement Project has failed “and the Project as it is currently designed cannot be justified financially” (one of the Senators is from Spokane, and the other is from Blaine).  Senator Curtis King, the Chairman of the Senate Transportation Committee, said the bill was referred to his panel, but “won’t get a hearing.”  King, a Republican Senator from Yakima, said in a statement:  “While I understand my colleagues’ concerns regarding the Seattle Tunnel Project, a bill to shut down a project of this size is not realistic.  I think most people know that this is a ‘mega project.’  You cannot bore a hole with that magnitude under a major city and believe that there will not be challenges.  There have been times when I too have been frustrated, but that doesn’t mean that we can just walk away from the contracts and agreements without serious financial consequences.”

Terminating the Seattle Tunnel Project before the TBM has been rescued after spending an excess of $1 billion on the Project would be a short-sighted and costly mistake, a decision which would remove all accountability from STP, the contractor.  As it stands now, the contractor on this design-build project has agreed to perform the job for a fixed price.  The root cause of the TBM’s failure has not been determined and, by all accounts, is likely not a compensable event.  Were the State to simply walk away from the Project at this point, the contractor would be entitled to a substantial equitable adjustment, $1 billion would have been spent, and the safety issue that exists with the Alaskan Way Viaduct in an earthquake would not have been addressed.  The fact that the contractor encountered a different site condition in 2012, which the DRB decided in the contractor’s favor, does not in any way presage that the present TBM breakdown is somehow a compensable event to be paid by taxpayers.  The burden remains on the contractor to show that the reason that the TBM broke down was due to a “different site condition,” or some significant departure from the baseline geotechnical data.  The burden to prove a different site condition in a different design-build contract is higher than in a run-of-the-mill design-bid-build project.

Once Bertha is rescued and the cause of Bertha’s failure is determined, and a determination is made as to whether Bertha can finish the Project, at that point in time, depending on the varied outcomes of those contingencies, it might be appropriate to revisit the feasibility of the Project.  At this point, talk of scrapping the Project is premature.

[iii]  Sydney Brownstone, “WSDOT Says if This Bertha Contractor Walks Out, We’ll Get Another One,”January 23, 2015.